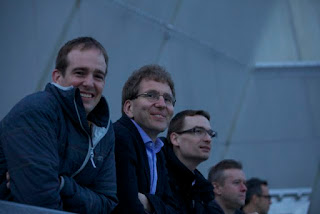 23:48, so tired that a Twitter message would be more appropriate. But, just wanted to make it for the record that today turned out to be a very pleasant day. I had the responsibility to host track #5, which started with Martin Büchi on Information Lifecycle Management in OLTP DBs with Partitioning. ILM is a subject that many postpone because it is too complicated. In Martin’s presentation he showed a reference model, illustrated various scenarios with alternative solutions. He then showed how partitioning can be used to archive data that has been aged out. I cannot possible make justice to his presentation, but since I write about it here I’m sure I’ll remember to come back to it, download it and digest it. If Mr Büchi reads this, he has it on record that he did well. Hope he’ll be back again.

Two hours later, two other Martins took the stage. Martin Paul Nash and Martin Bach introduced RAC Attack for the first time in Norway. I’ve been excited about RAC Attack since I took the courage to recommend it for the OUGN Board, and after getting the approval, inviting them over. They did not disappoint at all! The turnout was quite good; 20 people filled the room and started to hack on VirtualBox, VMware and Oracle. After lunch a few wearied off but the rest continued to the end. We where the last to leave the conference area and we got plenty of positive feedback on this. I think I’ve been tweeting enough on #RACATTACK lately, it was a great experience.

Actually OUGN was blessed by a fourth Martin, Martin Widlake. I couldn’t go to his presentation, but head counts and feedback showed his presentation went very well. I did have the pleasure to talk to him during the dinner later. The picture of the Martins where taken at Holmenkollen just before the dinner. Martin’s smile on his face pretty much sums up the mood after Day 0. Loved it.